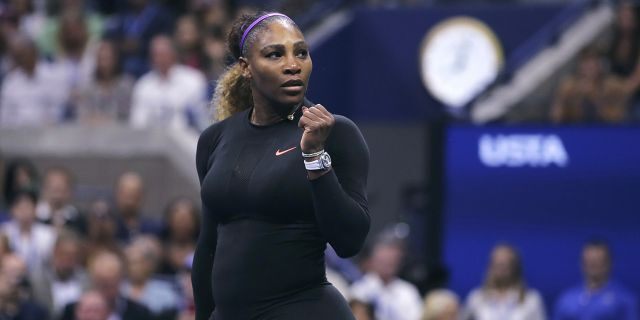 So I was watching the U.S. Open and Learning Lessons about Martial Arts…

I am not very good (actually I am really BAD) at tennis. The last time my buddy Joe asked me to play tennis I broke his racquet… that’s why it was the last time. BUT this is a KARATE lesson so I guess it’s OK…

…But anyway I wanted to watch the U.S. Open today because I like to see monumental events in sports and it’s pretty exciting to see Serena Williams in the finals. Not because I like Serene in particular – in fact, I don’t think I have ever watched her – but it’s just intriguing to see an all-time great reach an all-time record. I figured after reaching the finals three previous times (2 Wimbledon and the last U.S. Open) and she’d probably win, right?

The first “karate” lesson was Perseverance…

… we speak of this in martial arts all the time but sometimes this is “just a word”. To me, it’s what’s going on mentally that matters more than what you do. Serena was down 5 games to one and down 40 to 15 in the 2nd set. That’s called Championship Point for her opponent – Bianca Andreescu (a 19 year old Canadian). For you that don’t know tennis, that means that Serena would have to win the next point, and the game and every game thereafter to have a chance. She won the next point and got the score to 5 games to 5! BUT what I imagined at that point (down 5 to 1) – for most people – would be that it would be much easier to just give up. The odds of getting even the games at 5-5 are very slim. She wasn’t playing well. Just imagine in your mind how strong you have to be to keep going on!

That was amazing to watch!

In the end, she didn’t win and Bianca Andreescu did… so my next thought was…

The more important lesson – to me – was grace in losing…

Serena Williams is an internationally known superstar and widely considered the best of all time. BUT she needs one more major tennis win to match the all-time record of Margaret Court of 24 major championship wins to “own” the record. This was undeniably important to her for many reasons you can read about beyond what I am writing about here so I imagine the pain of losing (and being in those aforementioned 3 finals and losing) must have been painful – can you imagine that for a second? She also knew she hadn’t played up to her abilities (she’d crushed the last 3 more highly seeded players in the prior matches) and knew she didn’t have a good match… again can you imagine the disappointment?

Yet when she was on the stage and interviewed, in my view, she was pleasant, professional, complementary and exceedingly genuine and nice to her opponent and to the crowd and officials.

This seems to be the opposite of what I see recently – like the kid who didn’t like the referee’s call in a high school football game and head-butted him…  there are lots of examples… it’s so bad one youth soccer referee is publishing a page showing bad parent behavior. In karate we hope to do this better!

I don’t know or follow tennis well enough to know if Serena Williams is a great example or other behavior or if she should be a role model – and I don’t really care! I just like to see lessons to apply to what we do in martial arts to what is happening elsewhere. It does kinda make me a fan of Serena Williams though!

Founded in 1995 by Dr. Greg Moody a 8th degree Black Belt and Sr. Master Instructor, KarateBuilt Martial Arts and Karate lessons for pre-school children ages 3-6 and elementary age kids ages 7 and up are designed to develop the critical building blocks kids need – specialized for their age group – for school excellence and later success in life.

About Dr. Greg Moody:  Greg is a seventh degree black belt and senior master instructor.  He has a Ph.D. in Special Education from Arizona State University (along with a Master’s Degree in Counseling and a Bachelor’s Degree in Engineering – he actually is a rocket scientist). He has been teaching martial arts for over 25 years and has owned eight martial arts schools in Arizona and California. Sr. Master Moody is a motivational speaker and educator and teaches seminars in bullying, business, and martial arts training, around the world.