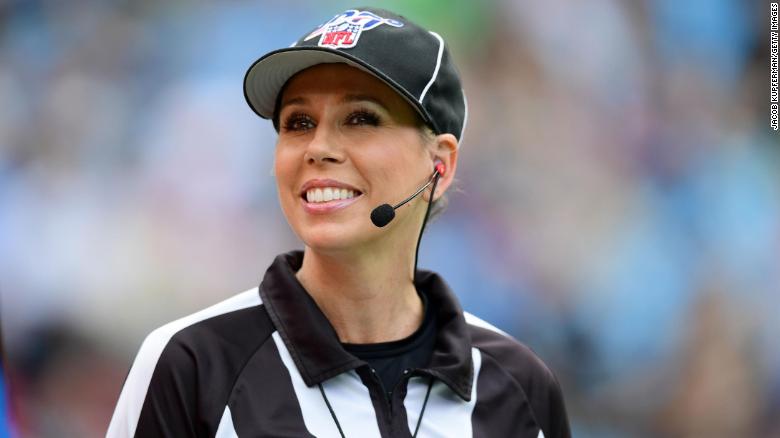 Karate is for girls too – here’s a NON-Karate story…

Here is the opening paragraph:

Andra Day’s Grammy-nominated 2016 hit ‘Rise Up’ has been featured in television shows and commercials — it was played on the campaign trail by Hillary Clinton and performed at the inauguration of President Joe Biden — but in a Tampa hotel room in February, the song had an audience of just one.

Sarah Thomas had deliberately loaded it onto her playlist and she became emotional. “You’re broken down and tired of living life on a merry-go-round,” Day sings, “But I promise we’ll take the world to its feet and move mountains.”

“It just impacted me so strongly that morning,” the 47-year-old told CNN. “Every word of that song has meaning to my journey.”

An hour later, Thomas left the hotel and went to the Super Bowl. That night, she was sharing the stage with Tom Brady, the Lombardi Trophy and over 100 million people watching worldwide.

And another glass ceiling had been shattered.

…read the rest of the article by clicking HERE – do it today :)

Her story is pretty cool but…

I love these kind of stories because it reminds me of when parents come in to KarateBuilt Martial Arts with a son and daughter and we ask “OK so the lessons are for both of the kids?” and they say “Oh no! Only for my son.” A little bit of Gender Bias is alive and well even with really meaning parents!
If you’ve ever been kicked by a girl, you know martial arts (and all sports) is for them too! There are SO MANY success stories at our school about young girls who become strong women who succeed that I wanted to share another one!
I look forward to seeing you next time!!

Founded in 1995 by Dr. Greg Moody an 8th degree Black Belt and Chief Master Instructor, KarateBuilt Martial Arts and Karate lessons for pre-school children ages 3-6 and elementary age kids ages 7 and up are designed to develop the critical building blocks kids need – specialized for their age group – for school excellence and later success in life.

Instructors can answer questions or be contacted 24 hours or the day, 7 days a week at 866-311-1032 for one of our nationwide locations. You can also visit our website at KarateBuilt.com.

Also, check us out on Groupon, EventBrite, HulaFrog, and on Go2Karate.com