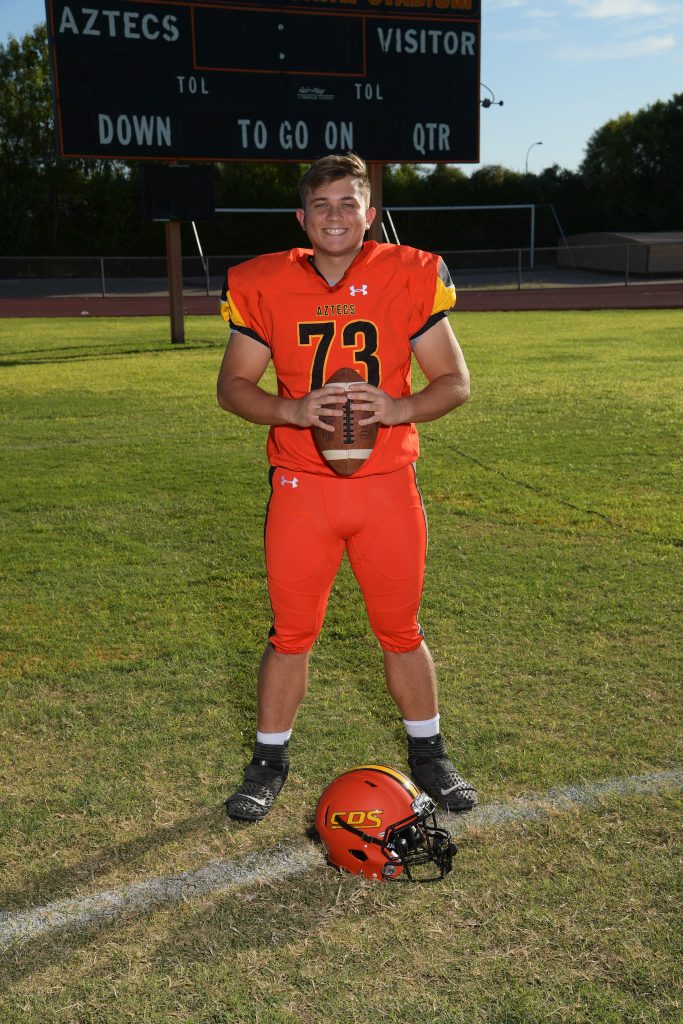 So my son, Alden was at his High School Football Banquet after the end of the season and a few things happened…

First, they announced that he was awarded the team’s LINEMAN OF THE YEAR… You can see the video of the coach awarding it here – it’s pretty fun… and funny – especially his teammates asking him to do some of his comedy.

Second thing – the coach announced the All-Region team and Alden MADE the All-Region team as a D-Lineman. This is in a region with the BIG schools and almost all of them were playoff teams. His coach also wasn’t allowed to vote for his own players either so this meant he made an impression on all the other coaches (and it’s kind of hard to do that as a lineman instead of a QB or receiver).

This is from a kid who was the only one his freshman year with zero experience… I also won’t go into it here but some of you know the challenges he’s had to overcome through his life… never complaining about it just reaching for new goals.

Hey, I am OBVIOUSLY telling you all because I am really proud of him but just like when I showed off his AWESOME play I do attribute it to all the hard work he put in with martial arts at 3 years old all the way through today. In fact, as I type this he’s teaching at my school and getting ready to test for 4th degree at ATA Spring Nationals.

But it reminded me of the conversation I had this week with Master Sanborn about leadership because it is Black Belt Goal Setting Season in the school and we were talking about how we hear so many darn definitions of leadership and there are a thousand (or more) books on leadership… and finally what we’re trying to teach.

I really don’t care what the other definitions people create. What we care about is what WE are trying to produce and we are trying to create students A) who can achieve more than they ever could otherwise, B) who can perform when they want to or need to (afraid or not), and C) who can stand up among others and speak when they need to and how they need to so people understand (afraid or not). With that, they’ll be leaders in the classics leader/follower sense and also in the personal achievement sense.

That’s what I was also proud of with my son. That he’s got a great start :)

Founded in 1995 by Dr. Greg Moody a 8th degree Black Belt and Sr. Master Instructor, KarateBuilt Martial Arts and Karate lessons for pre-school children ages 3-6 and elementary age kids ages 7 and up are designed to develop the critical building blocks kids need – specialized for their age group – for school excellence and later success in life.

About Dr. Greg Moody:  Greg is a eighth-degree black belt and senior master instructor.  He has a Ph.D. in Special Education from Arizona State University (along with a Master’s Degree in Counseling and a Bachelor’s Degree in Engineering – he actually is a rocket scientist). He has been teaching martial arts for over 25 years and has owned eight martial arts schools in Arizona and California. Sr. Master Moody is a motivational speaker and educator and teaches seminars in bullying, business, and martial arts training, around the world.

Please leave us a Review and Testimonial and tell us how well you enjoy our programs. Our goal is to serve our students with the highest quality training and facilities in Cave Creek & Chandler AZ, Memphis TN and Grand Rapids MI. Thank you for giving us the opportunity to serve you and your family. Please LEAVE A Review